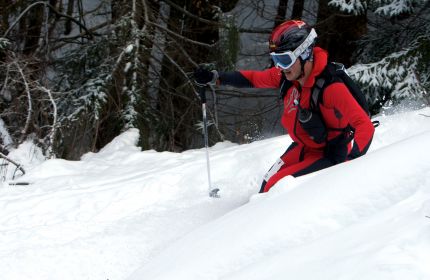 On the second day of races in Claut, the World Championship programme says that it is the turn of the Cadet and Junior classes to provide some show.
The young athletes have given their best on a trail with a difference in altitude of a thousand meters. The uphill stretches were three; about halfway through the second stretch, leading to Forcella Baldass, the young ski mountaineering prospects had to face a stretch on their crampons.
The race started at 9.30 from Pian del Muscol, a few kilometres from Claut, and a long stake trailed on the road that leads to Casera Pradut; after two kilometres the athletes turned left and went up towards Forcella Baldass.
At the head of this first part of the race there was the Swiss Alain Tissieres, though the German Anton Palzer lived up to his reputation and waited for the pace of the leader to drop and showed his skiing prowess on the downhill slope, leaving Tissieres far on his trail. Palzer crossed the finish line after 1.11.24, after him Tissiers after 1.31. The French Idris Hirsch arrived third.
With regard to the Italian contestants, Stefano Stradelli had to make do due to some technical problems to his gear, while Nadir Maguet and Mirko Ferrari brought home the sixth and seventh place; Michele Pedergnana arrived ninth.
For the Female Junior Class Axelle Mollaret won in 1.29.47. The French prospect led the whole race, followed closely by Jennifer Fiechter, who arrived only fifteen seconds short of the winner. The Italian Silvia Piccagnoni came third in 1.36.33.
For the Cadet class, Italy won all available medals with Federico Nicolini, the new World Champion, Luca Faifer, silver medallist, and Gianluca Vanzetta, bronze medallist.
Luoise Borgnet (France) won the gold medal for the Female Cadet class, preceding Laura Balet (Spain) and Ina Forchthammer (Austria) who arrived respectively second and third.
Tomorrow, for the third race day, the world championship will move to Piancavallo for the vertical race. The Senior, Espoir, Junior and Cadet classes will face an uphill-only race with a difference in altitude of about 600 meters.