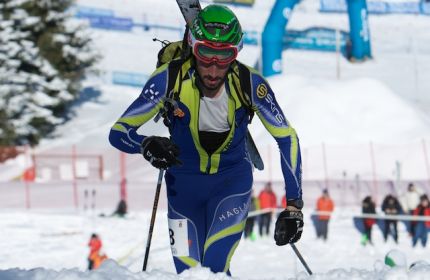 Martin Anthamatten and Laetitia Roux won the gold medal in the spectacular sprint race that took place in Piancavallo. Robert Antonioli came second for the skin of his teeth. The Cadet Luca Faifer won the gold medal. The French Louise Borgnet wins the Gold for the Cadet class. Alessandra Cazzanelli came second among the Junior athletes, while Axelle Mollaret came first. Among the Junior athletes Palzer confirmed his title once again.

The sun shone on the slopes of Piancavallo and brought out the spectacular landscape, snowed-in over the last two days. The Sprint race is fascinating, a combination of all the elements to Ski Mountaineering, though performed three times as fast. Everything happens in a matter of seconds, the medal is won or lost in a split second.
The first to leave, every thirty seconds, were the boys of the Cadet and Junior classes, and after the qualifying race the group moved straight on to the finals. Among the Cadets, the Italians have a very important task, in that they have to honour the medals conquered this far. Federico Nicolini collided against an opponent at the start line and lost his chance for a medal; Gianluca Vanzetta was among the leaders in the foot stretch, but when he put back his skis had some technical problems and lost his chance of competing for the podium. Luca Faifer, after two silver medals, wanted to strike gold and after a masterly conducted race could finally win the most precious of metals.
Among the female Cadets, the French Louise Borgnet won the gold medal, followed by Ina Forchthammer, and the Spaniard Laura Balet. Again, in the Junior class race, the German Palzer was simply no match for his opponents, racing also on the foot stretch, so he wonât let Tissieres get anywhere near his gold medal. Yes, his medal, in that the German at the last change already had a few secondsâ advantage that led his to the top of the world, once again. Alan Tissieres came second and the French Robin Mottiez came third.
For the female race Alessandra Cazzanelli was in top form, started in the lead and tried to broaden the gap with the runner-ups; at the first ski/foot stretch change she lost her pace and was passed. As they removed her gear for the final descent, her opponents got a few problem and the Valle dâAosta-born athlete took advantage of it, though the zipper on her suit is right below the straps of the backpack and for she is a few seconds short of starting first for the last stretch. For the brief descent there are no surprises and the Italian crosses the finish line second.
As for the Senior class qualifiers, the first thirty move on to the quarterfinals; the Italian are there, but they all lose in the quarterfinals with the exception of Robert Antonioli who seems to be truly focused for the final race.
Among the women the final is contended between Laetitia Roux, Nathalie Etzensperger, Gabrielle Magnenat, Mirielle Richard, Melanie Bernier, and Mireia MirÃ² Varela. The Spaniard MirÃ² Varela is not too reactive and is never really in the game; on the contrary, Roux seems to fly and wins the gold leaving behind the two Swiss opponents Etzensperger and Magnenat.
At Piancavallo silence takes over in wait for the last race; the starter signals the start of the race and everyone goes off the starting line as if they were pulled by strings. Robert is in the lead, pushes the group and in the bends loses a few meters; Marcel Marti then takes the lead. Antonioli follows suit and behind him all the others, in the following order: Alexandre Pellicier, Martin Anthamatten, Xavier Gachet and Yannic Ecoeur. Marcel Marti makes a mistake at the change and allows Antonioli to come first at the descent; the five giant slalom gates are fast, the Valtellina born ace spins a couple of time, one too many, maybe, since at the last bend, the one leading on to the final stretch, he is caught up by Anthamatten. Finally, the Swiss wins the gold twenty-three hundredths of a second before his opponent, the blink of an eye, and gets on the highest step of the podium. Robert Antonioli is second, though Gold among the Espoirs. Third is the Swiss Ecoeur.
Tomorrow the penultimate race of the Ski Mountaineering World Championship is going to take place. The Individual Race for the Espoir and Senior classes will start at ten from Pian del Muscol, 1350 meters of difference in altitude for the latter and 1160 metres for the women. The trail is in the same area as last Sundayâs team race. The athletes will tackle four uphill stretches and two foot stretches.