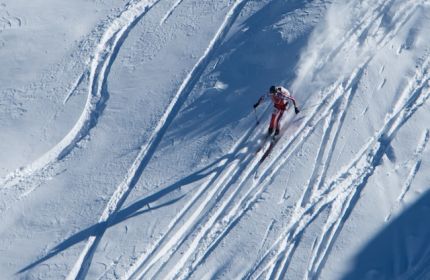 The Rossetum was blessed with sun and fresh powder for a spectacular race.

The sunny summit of the Rossetum was the perfect frame for anther top-notch sporting day. This morning the individual race medals were assigned in Claut; the Espoir and Senior classes races under the cheers of the crowd, on a trail with 1350 meters of difference in altitude, broken down into four uphill stretches.
The trail is spectacular, with very hard and challenging stretches; halfway through the third uphill stretch the track supervisors included a passage, leading off the Baldass ridge, equipped with a metal staircase. The male race started at 10, while the female athletes started ten minutes later. From the very start Kilian Jornet Burgada takes the lead of the race with the French team on his trail. At the first descent the French Blanc, Bon Mardion, and Buffet try to close in on the Spaniard, but Jornet Burgada seems uncatchable and at the second uphill stretch, the one leading to Forcella Baldass, the leader does with an advantage that amounts to almost two minutes.
During the female race Mireia MirÃ² Varela, a few minutes after the start, decided it was high time to wear another gold medal, Laetitia Roux did not even try to keep her pace, the only thought is not to make the gap grow by too many seconds. At the back of the two leaders Nathalie Etzensperger leads the Swiss group made up of: Marie Troillet, Gabrielle Magnenat, Emilie Gex-Fabry and Mireille Richard. Among the women the table did not change, Mireia MirÃ² Varela winning another gold in 1.24.54. The Spaniard is winner also among the Espoirs. Laetitia Roux gets to the second step of the podium while Etzensperger is third.
The Italian athlete Corinne Closâ fifth place places her just behind her superhuman opponents, Martina Valmassoi came thirteenth and fourth among the Espoirs. Again, among the Espoirs Mireille Richard won the solver medal and Emilie Favre came third.
With regard to men, Kilian Jornet Burgada keeps on his race on the ridges of Ressetum, followed by the French who cannot close in on the Spaniard. William Bon Mardion tried his best from the very start and in the last descent, by the finish line, he manages to bridge part of the gap. After winning the gold medal in the Vertical race, the Spanish athlete wins yet another one in 1.27.08, Bon Mardion is only 11 seconds after the winner. Yannik Buffet finished third.
The Italians are not in top form, Manfred Reichegger is fifth and Denis Trento finishes sixth. The medals come, once again, from the Espoirs Michele Boscacci and Robert Antonioli, winners of the gold and silver, respectively. The two athletes are at their first year in the upper class, and finished seventh and eight in the absolute table. Matteo Eydallin breaks a pole at the start and never gets into the thick of the race.
Tomorrow the World Championship will see its last act with the relay race. The trail will once again be the skiing district of Piancavallo that has proven to be the ideal ground in terms of logistics, visibility and entertainment.
The Male race will include four athletes per team, while the Female equivalent will include only three. As regards the youth classes the athletes will only be three, a Junior, a Cadet and a female Cadet of a female Junior. With regards to the side events, the presence of Mauro Corona was confirmed, both this evening in the streets of Claus and tomorrow, during the medal awarding ceremony and for the closing event of the World Championship.