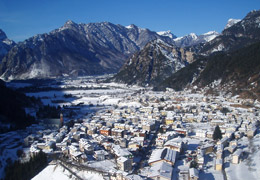 First of all the mountain and its rock walls that attract mountaineers and climbers from all over the world; its many itineraries for excursionists and bikers; the powerful rivers that gather kayak and canoe lovers. This is Valcellina, a paradise for nature and sport enthusiasts, a living gym placed in an unforgettable scenery.


After Pordenone, the capital city of Western Friuli, which can be reached with A4 Turin  Trieste motorway and the A28 section that connects it to Portogruaro, go North, cross Pordenone plains and reach the mountain feet, enjoying a continuously changing landscape. You will arrive in the Municipality of Montereale, at the footsteps of Friuli Dolomites, the natural and main entrance to the valley of Cellina. The valley went out of its century-old isolation only in the beginning of the 20th century with the construction of the road that connected Pordenone with Barcis, the improvement of the road system and also thanks to S.Osvaldo pass and Erto-Casso pass towards the Piave upper valley.

Going up from the valley we find the village of Andreis. Very impressive is the old junction of SS251: between tunnels and protected drops, the waters of Alba and Molassa rivers crash against the waters of Cellina river giving life to an incredible erosion phenomenon: the giant potholes. Andreis features houses with ancient wooden balconies, external stairs, stone walls that characterize the special Andreana architecture. After the last tunnel, suddenly Barcis is in front of you with its lake, the Gruppo del Cavallo and the huge Crep Nudo softens its edges. Following Cellina river, instead, the road starts its zigzag route until reaching the large plain of Porto Pinedo, a sun-bathed plain originating from the gravel deposits at the natural cross of Cellina and Cimoliana rivers. In the past this was a Port and hosted the river market for the transport and trade of wood for Venice. At the eastern border of the large plain is located Claut, placed on terraces on the green valley originated by the meeting of Cellina and Settimana rivers. All around the village offers a splendid landscape of forests and Dolomite mountains. History says that this community was born in the Lombard period. The other centre that we find in the North-West is Cimolais. Natural pivot of the park of Friuli Dolomites, a beautiful mountain village that displays many natural attractions such as the Bell tower of Val Montanaia. From Cimolais the road goes up and after crossing the woods of S. Osvaldo Pass we reach the Municipalities of Erto and Casso. The remains of Roman times demonstrate the ancient origins of Erto, differently from Casso, whose origin dates back to 14th century according to the documents. These places will always be marked by the memory of the tragedy occurred on 9th October 1963 with the landslide of Monte Toc into Vajont lake. From Erto and Casso SS251 road goes down expressing a sense of sadness, crossing the ruins of terrible October 63 towards the valley of Piave and reaches Longarone.

Valcellina, wild and untouched, with its people, its traditions and costumes, proposes itself as the guardian of an extremely valuable heritage, that few other places can boast.