The partnership was announced of the Tarvisio 2011 and Claut 2011 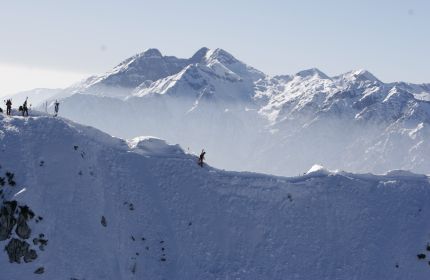 Tarvisio, 13 January 2011 â (TG) during the press conference held to present the Tarvisio female alpine skiing world cup, the full collaboration was announced of the Tarvisio 2011 Organizing Committee and the Valcellina Ski Mountaineering FVG Committee; the latter will organize in Claut and Piancavallo the Alpine Ski World Cup between Friday 18th and Saturday 26th February 2011.
The partnership, among the first of this kind and a clear example of a common effort between different areas in Friuli Venezia Giulia with a common organizational structure, aims at stimulating dialogue and close collaboration between the two committees that will organize two key events that shall contribute to further enhancing the name of Friuli Venezia Giulia.
Â«We have remarkable technical experience derived from having organized small rallies first and bigger and bigger events such as the World Cup race we hosted last year - explains Sergio Buricelli, head of the technical office of Claut 2011 â but we are still the "Cinderella" of the system. We lack a certain familiarity with international races and having a chance to work in bundle with the Tarvisio 2011 staff is for us a great, if not unique, opportunity to grow, both in terms of the experience in managing big events and communication. The Tarvisio Organizing Committee has already proven to be able to do both at an outstanding levelÂ».
Stefano Mazzolini, President of Promotur and Executive Chairman of Tarvisio 2011 also advocated the need for Ski Mountaineering to find its home in the mountains of Friuli Venezia Giulia. Â«The partnership between Tarvisio and Claut is key, also because alpine skiing is soon to be included among the Olympic disciplines; in addition this sport is also a previous economic resource from these mountains. As a matter of fact we should not forget that we need to work together, especially when it comes to promoting these events, in that the more sports events we host, the higher the tourist appeal of our region. We should also add that many athletes from Friuli are among the best in the world in this particular discipline. This is why we are making arrangements with ski mountaineering clubs in order to provide them the possibility of practising on our ski slopes after 4 pmÂ».
This is one big step Promotur is taking towards alpine skiers; as a matter of fact it doesnât just stop at the events but seeks a factual collaboration with this cluster of the skiing population that was long âforgottenâ. Â«Yes, it is true - concludes Mazzolini - I am a former athlete and as such I am more sensitive the different facets of sport; as a consequence it was easier for me to understand how important this sport is. Because if it may not be true that the presence of alpine skiers does not bring direct benefits to Promotur, it is undoubted that it does so indirectly to Friuli Venezia Giulia through the "tax returnsâ generated by the money spent in our regionÂ».