The countdown begins for the first race scheduled on Saturday morning 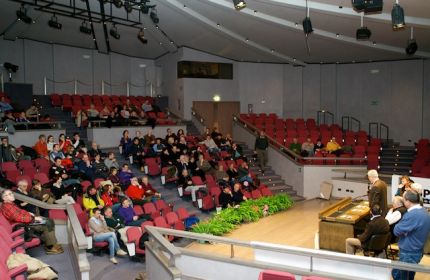 Sergio Buricelli and Carlo Martini acted as spokespersons of the World Championship Organizing Committee as the event draws nearer and nearer.
âWe are ready â said Sergio Buricelli, Technical Director of the event â unfortunately we have to wait and see how hard will the expected weather worsening be. This situation may force us to change the trails both at the bottom of the valley, given the lack of snow, and higher up on the mountains due to potential avalanche threats".
At the party in Gorizia, organized by the local CAI (Italian Alpine Club), there were also Gabriella Paruzzi, the exceptional host for the evening and Roberto Tessari, sports video operator and a long-time friend of the Ressetum snows. Tessari presented his short film entitled âBrÃ¹me e NÃ©vâ incredibly beautiful images that form the ideal fil rouge between the snow and the sweet dimples of milk and cream produced in the summer in the alpine huts that are literally covered in snow during the winter. The crowd also had a good time watching the documentary on the history of ski presented by Sergio De Infanti, a skiing instructor and alpine guide. The documentary was made also with the advice of Dante Spinotti, a well-known and admired member of the Hollywood circles.
As regards the delegations, they will arrive in Claut as early as Thursday, while the official opening of the race desk will be on Friday to allow the athletes to register. According to the technical programme, on Saturday morning (19 February) the races will start with the spectacular sprint race, the qualifiers are scheduled at 10.00 am while the finals will be at 3.00 pm. In the afternoon at the Ice rink of Claut there will be the official opening of the World Championship with the opening ceremony scheduled for 6.00 pm; a show you just cannot miss. Sunday will be the turn of the epitome of Ski Mountaineering, the team race, to start at 9.00 am sharp and cross the Ressetum. The competition is limited to the Espoir and Senior categories. On Monday and Tuesday it is the turn, respectively, of the Individual Junior Athletes race and the time trial, an uphill-only race for the Senior Category. On Wednesday the time trial will be restricted to the youth categories, on Thursday itâs again the turn of the Senior category with the individual race, while the official end of the Championship is scheduled on Friday afternoon, but no sooner that the spectacular relay race, to be held in the morning.
The trails have already been defined but the Technical Office of the Committee shall make its final choices between Wednesday and Thursday depending on the inches of snow expected to fall on Valcellina. The two time trials are to be held in the Piancavallo district, while the remaining races will take place in Claut and Casera Pradut; it is not, though, entirely impossible that the sprint and the relay race be held again in Piancavallo due to the snow shortage.
The World Championship programme does not only include the racing events, since Clautâs local promotion organization set up a number of side events for the athletes and assistants alike that will last throughout the event.
In collaboration with the Ersa, the Regional Agency for rural Development, immediately after the opening ceremony there will be a âTipicamente Friulanoâ tasting session involving the traditional food and wines from Friuli Venezia Giulia. In addition, every day at the end of the technical briefing that shows the features of the races that are to follow on the next day, there will be other âTipicamente Friulanoâ tasting sessions.
The âTipicamente Friulanoâ tasting sessions, held in bundle with the Italian Sommelier Association are to take place on Sunday, 20 February at 5.00 pm at Osteria Valmontanaia in Cimolais and Monday, again at 5.00 pm, at Bar Centrale in Barcis. Tuesday at the usual time the session will move to Erto Vecchia, while on Wednesday the tasting lovers will have to go to the âAlla Rosaâ Restaurant of Cimolais.
Other side events scheduled for Saturday evening include Ice Climbing and Sled and Bob competitions at the Ice Park. After the opening ceremony the food and wine kiosks will be open and Mr. Ale djâs music will accompany the party. On Sunday afternoon four âwellbeing couponsâ to be used at the Bibione Spa and other prestigious prizes will be drawn. In the evening, besides the âNotte Biancaâ â the stores will stay open until midnight â the programme includes the show âDue uomini di parolaâ, featuring Luigi Maieron and Mauro Corona. The Youth Night is scheduled for Monday evening with the music of the âPortil Bluesâ band. Two days before the end of the World Championship, on Wednesday at 9.00 pm, there will be the show âMusiche dal Mondoâ, belly dancing and Capoeira. On Thursday evening it will be the turn of mountain safety, courtesy of the Regional Avalanche Desk. The World Championship will officially close on Friday with a great party, all in the name of âTipicamente Friulanoâ.