For safety and entertainment purposes the World Championship programme has changed: 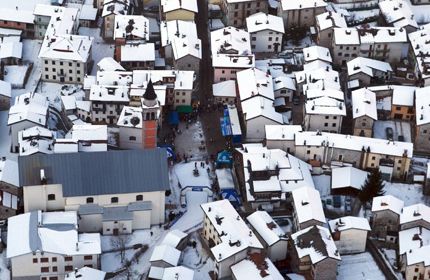 This morning Adriano Greco â track supervisor - and Sergio Buricelli took the ISMF International Federation Jury, made up of Antonie Cina, Stefano Mottini and Feliu Izard to the Piancavallo district for the first operational survey. The layer of snow after last nightâs falls has increased by twenty centimetres in Claut, ninety centimetres in high up towards Casera Pradut and the same amount on the slopes of Piancavallo.
The jury and the technical supervisors decided to change the World Championship programme for safety reasons and to increase the level of entertainment of the sprint race. On Sunday morning, instead of the sprint race, taking place in Claut, the athletes will only practice, while no change is scheduled for the opening ceremony at the Ice rink of Claut. The sprint race will be held on Wednesday morning while the vertical race for the youth classes, already included in the programme, will take place on Tuesday as well as the senior class race. As per the official programme the schedule has not changed for the Sunday morning team race and the individual youth race to be held on Monday. The schedule for the last two days, namely, Thursday (individual senior race) and Friday (relay) was not changed.
âWe made this decision â reported Sergio Buricelli â in agreement with the international jury, as we believe this is the most sensible choice given the amount of fresh snow that fell both in the village and on the slopes high up in the mountains. The start of Vertical races at Piancavallo are highly entertaining; the trail will start from Busa del Sauc, at the very heart of the skiing district, and will move up onto the slopes (Salomon) and partly out of the slopes. We had to reduce the difference in altitude because of the avalanche hazard at higher altitudesâ.
The director of the skiing district of Piancavallo, Enzo Sima, confirmed the full collaboration for this change of plan and besides this he allowed the athletes to practice on the slopes in a suitable and safe lane laid for this purpose. With regard to practice before the off-slope races in Claut, the athletes access the facility only on the âStrada Forestaleâ road that leads to Casera Pradut.
The survey to the trails of Piancavallo was not the only measure, since a team of fore runners coordinated by the Alpine guide Riccardo Del Fabbro, went up towards Pradut to assess the state of the snow layer up in altitude. âLast night about ninety centimetres of snow fell â said Del Fabbro â we are waiting to see how the situation unwinds. We theorized a trail of about a 1900-meter difference in altitude with three uphill stretches and a foot stretch about halfway through the second uphill stretch. On Friday evening weâll decide on the final trailâ.