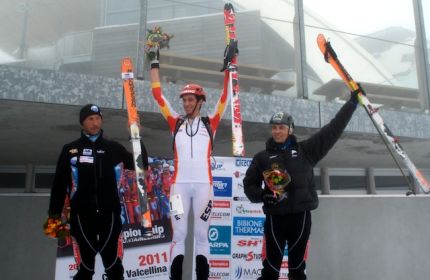 Italy takes the three tops spots for the cadet class with Federico Nicolini, Luca Faifer and Gianluca Vanzetta. Silvia Piccagnoni is once again the bronze medallist. The two espoir athletes, Antonioli and Boscacci, win the silver and bronze medals.
This morning the athletes competing for the World Championship once again woke up to a snowed up landscape. The first Vertical Race scheduled for the day was for the youth classes; the Cadets and Juniors started at ten sharp. After twenty minutes the girls of the youth classes had their race, followed by the female and male in the senior classes. The trail, uphill only, of course, had a difference in altitude of 540 meters and started from Busa del Sauc and went up to Rifugio Tremol. The Organizing Committee had planned a foot stretch right after Rifugio Arneri.
For the Senior class the race was decided right after the foot stretch; the leader at the set-up change at the beginning of the foot stretch was the French Yannick Buffet, chased twenty seconds away by Kilian Jornet Burgada and William Bom Mardion. Damiano Lenzi was on fourth place. The Spaniard passed Buffet, who had a few problems securing his skis to the backpack. In the upper stretch the fog covered the finish line banner; Killian came out of the clouds uncontested and crossed finish line after 24.44. Buffet came second only four seconds away from the gold medal. The other French, William Bon Mardion came third in 25.15. Damiano Lenzi is once again fourth, only 16 seconds shy of the bronze medal.
As regards the female race, two girls won the gold medal, namely, the Spanish athlete Mireia MirÃ² Varela and her French colleague Laetitia Roux. The Spaniard had a very fast start and left her friend Roux without any chance to react. Mireia MirÃ² Varela arrived at Tremol after 27.34 leaving Roux as runner-up with one minute of delay. Third was the surprise of the day, the Spaniard Gemma ArrÃ². The Italian Corinne Clos is ninth.
As regards the youth races, for the Junior class the winner was the Swiss Alan Tisseres, who got his revenge on Anton Palzer. The Swiss won in 26.03, while the German opponent came little short of a minute later. The third place was harshly contested to the very last minute between Philipp Reiter and Idris Hirsch. Hirsch had the better of his opponent with a final time of 28.15. As regards the Italian team, Stefano Stradelli came sixth and Michele Pedergnana was eighth.
For the Cadet class, the kids trained by Nicola Invernizzi have taken a liking for the podium, since this morning, too, Federico Nicolini, Luca Faifer and Gianluca Vanzetta won the gold, silver and bronze medals.
Among the Female Junior Class Silvia Piccagnoni confirms her bronze medal, while Axelle Mollaret won the gold medal and Jennifer Fiechter the silver one. Alessandra Cazzanelli could not leave her health issues behind and came fifth.
For the Female Cadet class the winner was the French Louise Borgnet, Giorgia Dalla Zanna came fourth. Tomorrow morning, again in Piancavallo, the sprint race is to take place at 9.00 am.