Italy flies to the top of the world. 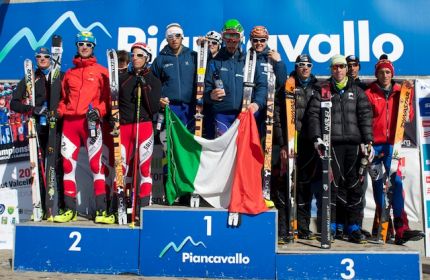 Switzerland win the gold medal for the female class with Etzensperger, Magnenat, Richard. The Swiss win also the youth race.

On the closing day of the Claut World Championship, the relay race medals were assigned at Piancavallo. The spectacular race tells about the strength and determination not of one single element, but an entire nation, a mix of the skills of all the athletes involved.
The menâs race was uncertain until the very end, with Switzerland, France and Italy fighting without quarters for the gold medal. At the beginning Switzerland started in the lead; Eydallin, the first in the Italian team could not keep the pace with Marcel Marti. Yannick Buffet was the first to get to the change spot. In the second stretch it was the turn of Robert Antonioli, Yannick Ecoeur for Switzerland and Didier Blanc for France. Robert Antonioli manages to fill the gap with the race leader and gets to the change in the second place. Antonioli ran an outstanding stretch with the second best time. At the following change Switzerland is still ahead, Manfred Reicchegger competing against Martin Anthamatten who seems to have a superior pace.
The last stretch saw Denis Trentoâs masterpiece in motion; the Valle dâAosta born athlete starts with his target set on the Swiss opponent, Marcel Theux; for the first uphill slope he lets him go loose, but on the foot stretch the Italian steps on the gas pedal and races towards his team mates who are waiting for him by the finish line.
The Italian Ski Mountaineering Team wins its tenth gold medal. With regard to the number of medals won, Italy is third with twenty-seven; besides the gold medals, there are twelve silvers and five bronzes. For the womenâs race Switzerland leads fraction after fraction, chased by France and Spain. France manages to conquer the bronze medal thanks to the incredible race of Mireia MirÃ² Varela who lands the best time of the day. Switzerland win the gold medal with a time of 24.26, France and Spain win the silver and bronze. The Italian athletes, Corinne Clos, Silvia Piccagnoni and Martina Valmassoi are fifth in 28.35.
With regard to the youth classes, Casa Italia brings home another silver with Alessandra Cazzanelli, Luca Faifer and Nadir Maguet. Maguet, at his first professional year, gets to the last ski skin change with an advantage of about 15 seconds. The Italian has some problems with his ski skins and loses his advantage in the blink of an eye.
The Swiss Alan Tissieres crosses the finish line and hugs Jennifer Fiechter and Thomas Corthay. The third place is for the French Axelle Mollaret, Emilio Corbex and Idris Hirsch. The Ski Mountaineering World Championship confirms Piancavallo as the ideal setting for the short, yet spectacular, events of this incredible discipline. Thanks to the precious and irreplaceable collaboration of Enzo Sima, Piancavallo has proven first and foremost to have a natural inclination for hosting highly spectacular competitions such as this. The first took place on Tuesday 22. The steep slopes of the Salomon trail gave the athletes an outstanding Vertical race. The time trial awarded the incredible Spanish athlete Kilian Jornet Burgada who, with a very technical ascent, did the 540 meters in altitude difference in one go, all the way to Val dei Sass in only 24â. The most impressive results came on Wednesday and today with the sprint and relay races at Busa del Sauc. The morphology of the track, the impeccable terrain, the sheer professionalism and availability of the Promotur technicians allowed to select two highly-technical trails that got the anonymous praise form everyone, more specifically the heads of the ISMF International Ski Mountaineering Federation. Interviewed after the race, Director Cina confirmed his farsightedness and said to be ready to harvest the results of this international triplet that may establish Piancavallo among the major winter tourism resorts in Italy for ski mountaineering.
The World Championship is to end this evening with the relay race medal-awarding ceremonies and the spectacular closing ceremony. After the official speeches and the closing address by President Lluis Lopez, the Claut 2011 torch will be put out leaving room for the celebration organized for the athletes and the ski mountaineering fans.