The Ski Mountaineering World Championship has come to an end 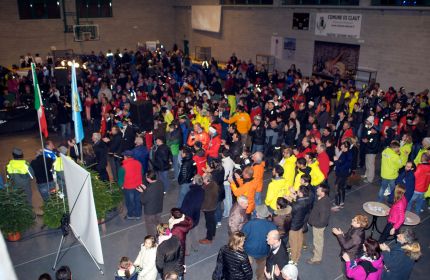 The Ski Mountaineering World Championship has come to an end but the success still resonates thanks to the passions of those who believed in the project.

On 25 February the Claut 2011 Ski Mountaineering World Championship has ended in the most desirable fashion with a grand party that involved everyone, from the athletes to their assistant, not to mention the volunteers and local associations that actively contributed for the whole week to the top-level competitions and races. Twenty-one nations were competing in the World Championship, for a total number of 250 athletes. Kilian Jornet Burgada was the winner of the individual and vertical races, while the very young Mireia Miro Varela followed the path of her teammate for the womenâs class. France won the special prize for the general ranking.
The Institutions that believed in this event and were willing to contribute their support were precious and made a real difference from both a financial standpoint and the services provided to the FVG Valcellina Ski Mountaineering Organizing Committee.
As a matter of fact the Autonomous Region of Friuli Venezia Giulia provided a factual support by allocating suitable funding and by involving its own reference technical bodies such as the Civil Defence, the Regional Weather Observatory, The Regional 118 Rescue Service, the Regional Forestry Service, the FVG Tourism Desk and the Regional Agency for Rural Development. The Regional Department involved in the event were the Sports Department (Councillor Elio De Anna), the Tourism Department (Councillor Federica Seganti), the Civil Defence Department (Councillor Luca Ciriani), the Rural, Agricultural and Forestry Resource Department (Councillor Claudio Violino) and the Healthcare Department (Councillor Vladimir Kosic).
The support provided by other authorities and institutions such as the Province of Pordenone, in the persons of the President Alessandro Ciriani and Councillor Michele Boria, was of the utmost importance, together with the Mountain community of Western Friuli and its Commissioner Primo Perosa, The Health Unit n.6 and its Director Giuseppe Tonutti, The Dolomiti Friulane National Park and its President Luciano Pezzin, the Chamber of Commerce, Industry and Crafts of Pordenone and its President Giovanni Pavan and the Crup Foundation with its President Lionello DâAgostini and the Vice President Carlo Faleschini.
Prevention and safety in the villages at the bottom of the valley and in the racing facilities was guaranteed also by the National Forestry Service, the Carabinieri of Selva di Val Gardena, the Police Department of Moena and the Fiscal Police of Tolmezzo and Sella Nevea. The deployment and coordination of the safety and prevention forces was possible thanks to the personal involvement and collaboration of the Magistrate of Pordenone and the Carabinieri station of Cimolais.
The races took place in the ski mountaineering district of Pradut RessetÃ¹m (Claut) and in the Piancavallo Skiing District (Aviano), thanks to the precious support provided by Promotur and the Municipal Authority of Aviano.
The generous contribution provided by the many sponsors was crucial, in that they helped to support the event by providing key resources and services that resulted in the outstanding success. More specifically, the sponsors that provided help to the event included national and international players as well as local entrepreneurs.
The FVG Valcellina Ski Mountaineering Committee, a branch of the FISI (Italian Winter Sports Federation), got the full support of the CONI (Italian National Olympic Committee) and was also honoured with the presence of Emanuela Di Centa, the IOC (International Olympic Committee) delegate appointed with evaluating and defining the approach and inclusion process for Ski Mountaineering as an Olympic discipline.
In such a context, the President of the ISMF â International Ski Mountaineering Federation â was also present in Claut; the international organization, together with the international jury, expressed their appreciation for the absolute quality of the sporting event.
The Claut 2011 World Championship week was not only a sporting event, but also a range of meetings, seminars, entertainment and parties open to everyone. The entire Valcellina community (including the municipalities of Andreis, Barcis, Cimolais and Erto e Casso) was involved to host about a thousand people per day; the special support provided by the Municipality of Pordenone should not be left unmentioned; the authority provided a number of lovely wooden sheds that turned the main square of Claut into an Olympic village open to athletes, participants, companies and local and technical product representatives.
The villages of the valley set up some âTipicamente Friulanoâ (Friuli traditional wines and produce) tasting sessions; thus the valley community and the whole Region sent out a message of great hospitality straight to the Ski Mountaineering circle.